Rida brings to the role a wealth of experience, a strong vision for VIP's future, and a deep familiarity with the communities VIP serves.

Richard Coble has always aimed to fight for the underdog. After earning his undergraduate degree at the University of Connecticut, he attended Drexel University’s law school with plans to work as a criminal defense attorney. Richard has always had a passion for justice and equality, and after being introduced to VIP through his firm, van der Veen, O’Neill, Hartshorn & Levin, he dove into one of VIP’s Protection from Abuse (PFA) cases. 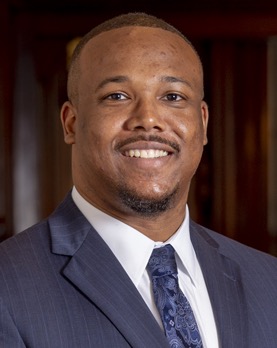 The client, a young mother, had spent hundreds of hours in court fighting for independence and safety from her son’s abusive father. But because she could not afford legal representation and had difficulty navigating the courtroom on her own, she never got the outcome she needed. When Richard started volunteering on the case in 2018, the family’s situation was especially dire: the biweekly visits between the client’s son and his father were increasingly marred by brutal abuse, but the client couldn’t break her custody order without help from the court.

The judge agreed to grant PFA orders for the client, but Richard knew that wasn’t enough. He convinced the judge of the need to bar the father from contact with the son as well. Richard’s fierce advocacy on behalf of his client resulted in both mother and son receiving final orders protecting them from their abuser.

When Richard reflected on his first VIP case, he was struck by how simple it was for him to make a meaningful impact on someone’s life:

For me, it was as easy as giving up my lunch break. For my client, it was the world.

Richard says the best part of his pro bono work is helping people who would likely never have the opportunity to get the outcomes he can obtain for them. When asked what he found most surprising about his work with VIP, he spoke about the difference in outcomes based on representation: “You hear it all the time, but this experience really demonstrated the disparity of outcomes based on the simple fact of representation. Oftentimes, the stories or the facts aren’t what dictate a positive outcome, but rather just the ability to speak with clarity and get your point across.”

After making such a difference in his first VIP case, Richard jumped at the opportunity to take on another pro bono PFA case. When asked what advice he would give an attorney looking to get involved with pro bono, he said,

As 2020 comes to an end, VIP celebrates an important partner whose praises too often go unsung: the finance team at the Philadelphia Bar Association.

Nicholas Maxymuik has never taken the easy route. He always knew he wanted to become a lawyer, but he also knew the path wouldn’t be simple...

Dana Aoyama feels a special connection to family law as a parent: “Every time a parent is trying to better a child’s position, I want to help..."