Nate R. Bohlander, a partner at Morgan & Akins, PLLC and a seasoned VIP volunteer, wrote an article in the Philadelphia Bar Reporter about how a VIP-provided mentor helped him achieve a life-changing outcome for his pro bono client. 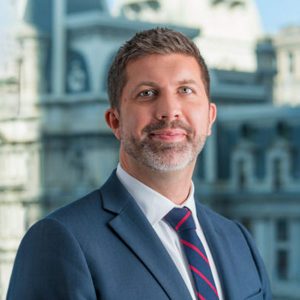 In early 1998, Janet Downs* purchased a North Philadelphia home with her husband. Less than a year later, she obtained a Protection from Abuse order against him. He moved out of the home, and Ms. Downs has not seen or spoken with him since.

For more than two decades, Ms. Downs lived in, and took care of, their home. She paid all the bills and performed all the maintenance by herself.  But when Ms. Downs tried to apply for programs for homeowners, she was deemed ineligible because she was unable to secure the signatures of both record owners of the home.

Ms. Downs contacted Philadelphia VIP for help back in 2016.  Since the relief she sought was based on her ability to quiet title via adverse possession, and the required statutory period was 21 years at that time, Ms. Downs was forced to wait four more long years to resolve this issue.

Undeterred, in March 2020, Ms. Downs reengaged with VIP. Shortly thereafter, I accepted her case. Since the primary focus of my practice is civil defense litigation, I was the epitome of a “fish out of water” with respect to quieting title via adverse possession. I was committed to serving Ms. Downs as I would any other client, but I didn’t have any basis of knowledge in real estate law to steadily move the matter toward resolution.

Luckily, VIP and their mentors were there to help. The case presented a myriad of hurdles. The most notable of these was our inability to locate Ms. Downs’ former husband. The Complaint was filed, but effectuating proper service proved problematic. While we eventually served the Defendant, several additional filings were necessary, including a Motion for Default Judgment, and the matter proved to be more involved than initially anticipated. VIP and one of their outside mentors assisted me every step of the way and exponentially expanded my knowledge of real estate law along the way.

A few months ago, the Court granted our Motion for Default Judgment. Armed with this Order, a new deed was recorded, giving Ms. Downs title to her home. Ms. Downs is now the sole owner of the home she has occupied for over twenty years. She is able to apply for homeowner assistance programs and move past an issue that has preoccupied her for a long time. It was a pleasure getting to know Ms. Downs and representing her in this vital matter. She repeatedly expressed her appreciation that, after a long and arduous road, she had reached her goal: to become a homeowner.

Ms. Downs’ case also highlights the ways in which volunteer attorneys can handle pro bono cases even if they have little or no knowledge of a particular legal area. As I can attest, the resources available at the volunteer attorneys’ disposal are substantial, and Philadelphia VIP and their outside mentors are there to provide support throughout the pendency of the case.

*The client’s real name has been changed for this article, to preserve confidentiality.

Welcoming Excellence to VIP’s Board of Directors

VIP's homeownership program was featured in an article by the Thomson Reuters Foundation.

Todd Nothstein Departs for Legal Clinic for the Disabled