When VIP volunteer Diana Sisum took an extended leave from her law practice to care for her young sons, she didn’t put her pro bono service on hold. Instead, she called VIP’s office and asked a question that came to make a difference in many clients’ lives: “How can I help?”

Diana, who is of counsel at the Devine Timoney 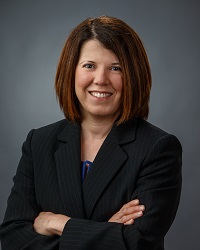 Law Group and has over fourteen years’ experience
in insurance and related litigation, first volunteered
with VIP in 2007. Eager to contribute, she took on
complex torts matters in unfamiliar subject areas.
As she ventured into new practice areas, she never
felt out of her depth, thanks in part to support from
the VIP team. In Diana’s words: “VIP treats its
volunteers as if they’re arguing in front of the
Supreme Court. The team is so supportive and
grateful.”

When Diana stepped back to focus on raising her children, she expected she would have to dial back her involvement with pro bono as well. Even so, she still wanted to be of service. “I even offered to do legal research for other volunteers,” she recalls. “I just wanted to help.” As it turned out, Diana possessed a skill that met a dire need within VIP: she spoke Spanish. In the past year, she has become a standby interpreter for VIP’s Spanish-speaking clients facing eviction cases.

In putting her language ability to use, Diana not only builds a critical bridge between VIP and its clients, she also finds a sense of personal fulfillment. The daughter of immigrants from Cuba and Argentina, Diana relates to the Philadelphians for whom she interprets.

"Most people are navigating challenging economic scenarios, and they don’t even know how the law works, and it's our job to step up to help."

"These individuals are the kind of people who want what's best for their family, and they should be able to pass that on."

"Traveling to notarize something for a pro bono client is simple for me, but it's life-changing for them."