I Have a Home to Live In, and I Own It 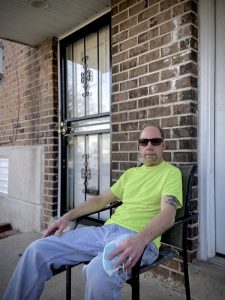 Michael Schwartz was living with his mother and aunt in their family home when a series of misfortunes changed his life forever. After Michael’s aunt and mother passed away in 2012, his entire family agreed he should keep the home. However, his aunt had died intestate, leaving her half of the house in limbo.

With his family’s support, Michael began probating the estate, but the process was suddenly and tragically pushed to a back burner when he was injured in a tractor-trailer accident that left him permanently disabled.

Michael worked with injury lawyers to recover damages from the accident, but while he recuperated, he fell behind on his mortgage. He quickly settled the tort claim so he could use the settlement to avoid a short sale. This allowed Michael to stay in the home, but still didn’t give him legal ownership. Eventually, his lawyers referred him to VIP to pick up the probate process where he left off.

With VIP’s help, Michael successfully fought an outstanding lien of over $100,000, and in early 2020, VIP volunteer attorney Diane Zilka took the case. “I felt some hesitation. This was my first probate case – in a pandemic, no less – and probate has a reputation for being arcane,” Diane says. “But I strive to take cases where VIP’s clients need the most help, and I knew I could count on the support of VIP’s staff.”

Diane made easy work of the process, recording a new deed just a few months later. By October 2020, Michael finally had legal title to the home where he had lived for so many years. Even today, Michael says there are “no words to express how grateful and appreciative I am. I have a home to live in and I own it. I tell everyone I know. Diane and the VIP staff have hearts of gold. They actually care.”