Help a fellow Philadelphian who faces a legal threat to their housing, family, and income - take a case 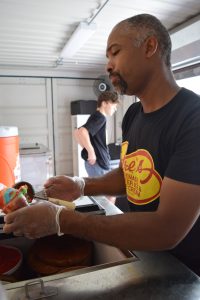 Dre’s Homemade Water Ice & Ice Cream, founded by Andre (Dre) Andrews, is a staple in Philadelphia stores and communities. Founded in 2015, Dre started the company with just a single push cart selling water ice in local neighborhoods. In the past seven years, he has grown the enterprise into a successful small business, with his water ice sold in stores throughout Philadelphia as well in mobile trucks scattered throughout the city. Like most small businesses, Dre faced challenges as he continued to grow. Over the years, Dre turned to VIP’s small business program for help.

Dre first reached out to VIP for help trademarking the name and logo of Dre’s Water Ice & Ice Cream. VIP was found a volunteer attorney to help Dre register his trademark, and this enabled his business to grow as well; he was able to negotiate with a local supermarket chain to acquire shelf space.

Since founding his business in 2015, Dre has turned to VIP for legal questions and help almost every year. Dre most recently reached out for assistance during the pandemic, and received legal assistance through VIP’s Ask an Attorney program. After an hour-long consultation regarding a dispute, Dre applied for extended representation from a volunteer for the same issue, which pertained to production and packaging of his ice cream.

Thanks to his VIP volunteer lawyers, Dre’s business has navigated the many challenges posed by the past few years. Click the link below to learn how your small business might also benefit from VIP’s programs.

“School is not the time to be comfortable. The best thing to do, the best exposure you can get, is to go and do it.”

The Monkey & The Elephant

The Monkey & The Elephant is trying to bridge a gap in the foster care system, and they've been successful with a little help from VIP.